The south aisle chapel (also known as the Patron’s Chapel) lacked a focal point for this space which is flooded with light from the large, clear-glazed windows. This major new sculpture was paid for by a generous grant from The Cottam Will Trust and donations in memory of John Appleby (1925-2011), Lay Reader at Great Bromley Church for many years.

The inspiration for the reredos (which means "screen behind the altar") came from the final chapter of the final book of the Bible, describing a vision of 'the Healing of the Nations':

And he shewed me a pure river of water of life, clear as crystal, proceeding out of the throne of God and of the Lamb.  In the midst of the street of it, and on either side of the river, was there the tree of life, which bare twelve manner of fruits, and yielded her fruit every month: and the leaves of the tree were for the healing of the nations. 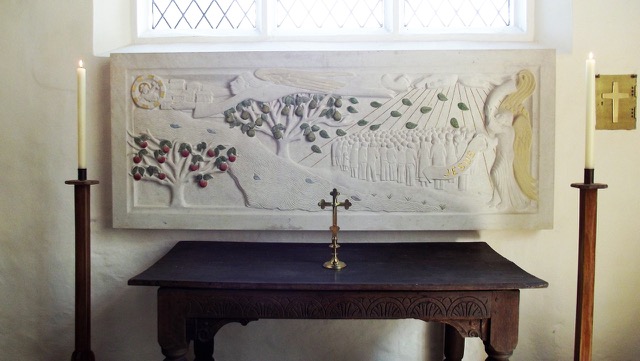 Above is the River of Life reredos, behind the altar in the South Aisle of the church.

The sculptor of the frieze is Antonia Hockton (www.antoniahockton.co.uk) who has an MA in Fine Art from the Norwich School of Art as well as a NJCBI qualification in sculpture conservation for work on Lincoln Cathedral and she has since worked on sculpture at The Basilica of Notre-Dame, Poitiers in France, and colleges of the University of Oxford.  The stone used on the Great Bromley frieze is limestone from Ancaster in Lincolnshire. 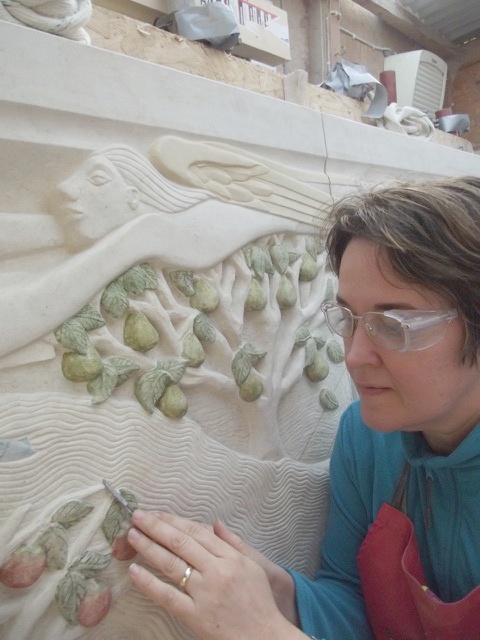 Above: Antonia Hockton at work on the River of Life reredos in her studio.

In 2015 the River of Life altarpiece was shortlisted in the ACE Awards (Art & Christianity Enquiry) competition for art in a religious context.  There was stiff competition in the short list and the winner was announced in the Chapel of King's College, London, on 26 November 2015:

Text copyright: PCC of The Bromleys