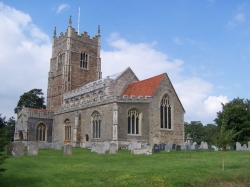 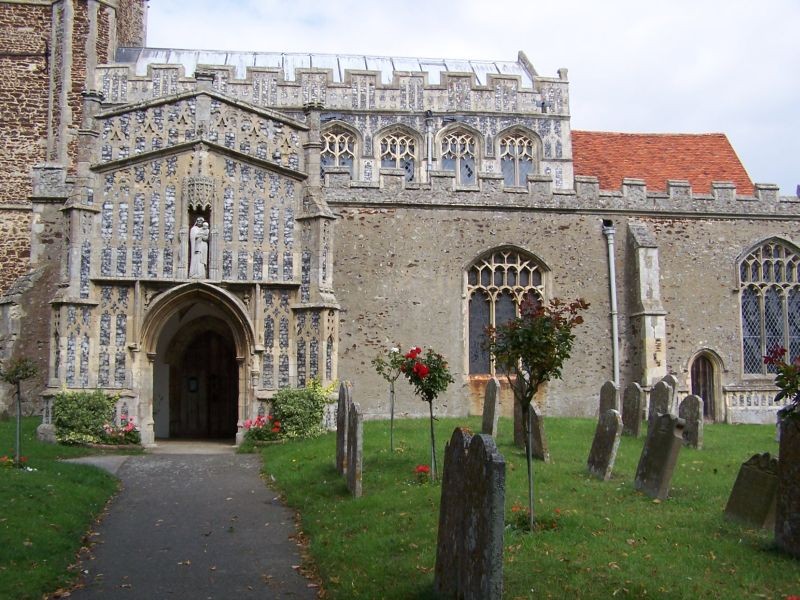 Great Bromley Church, sometimes proudly called the Cathedral of the Tendring Hundred, is a fine example of East Anglian gothic architecture of the 14th and 15th centuries. Its oldest parts are the South aisle (including the entrance doorway within the porch), the south arcade of the nave and the chancel. These are of the 14th century (though the chancel was much restored and altered in the 19th C). The massive tower, the north aisle and north arcade of the nave, the south chapel and the south porch are of the 15th century. The clerestory windows ranged above the arches of the nave were built in about 1500, as was the magnificent double hammerbeam roof that spans the nave.

The tower and the oaken hammerbeam roof structure (one of the best examples of its kind) are the chief glories of the building but the south porch and other parts of the exterior show fine examples of knapped flint "flushwork", with traceried panels. 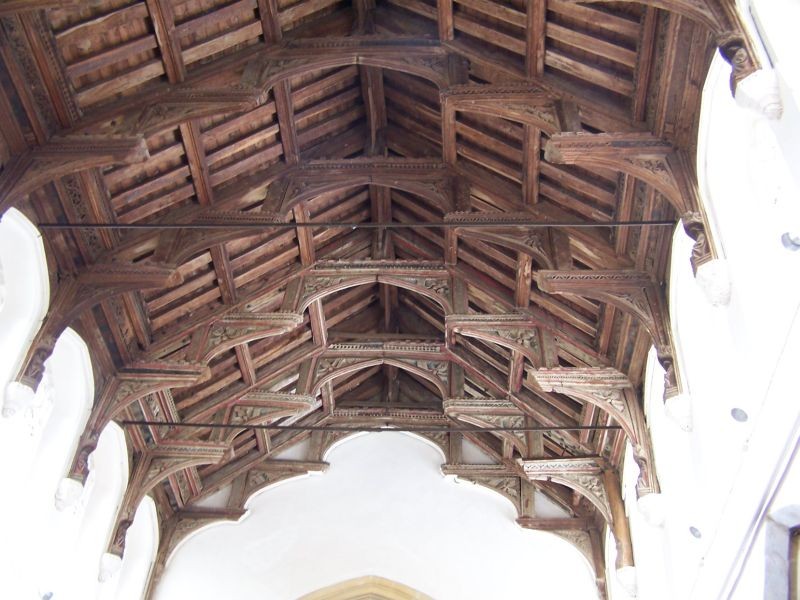 Above the porch entrance stand the figures of the church's patron, St George and his dragon. Figures of Adam and Eve are set above the wonderfully carved doorway inside the south porch. The west doors, which must once have been almost as wonderful, are now much weathered. The south arcade carved capitals of the nave have now partly broken stone leaves with the fascinating capital of the western column with its mixture of human, animal, devilish and heavenly figures. In the south chapel stand the memorials to young members of the Hanson family who lived in Great Bromley Hall (now Seven Rivers Cheshire Home). Notice that the gallantry of one of these young men, killed in the Peninsular War, was so conspicuous as to be recognised by the enemy's Marshal Suchet. There is the now barely legible grave slab of Sir Thomas Bowes, a notorious 17th century persecutor of supposed witches. 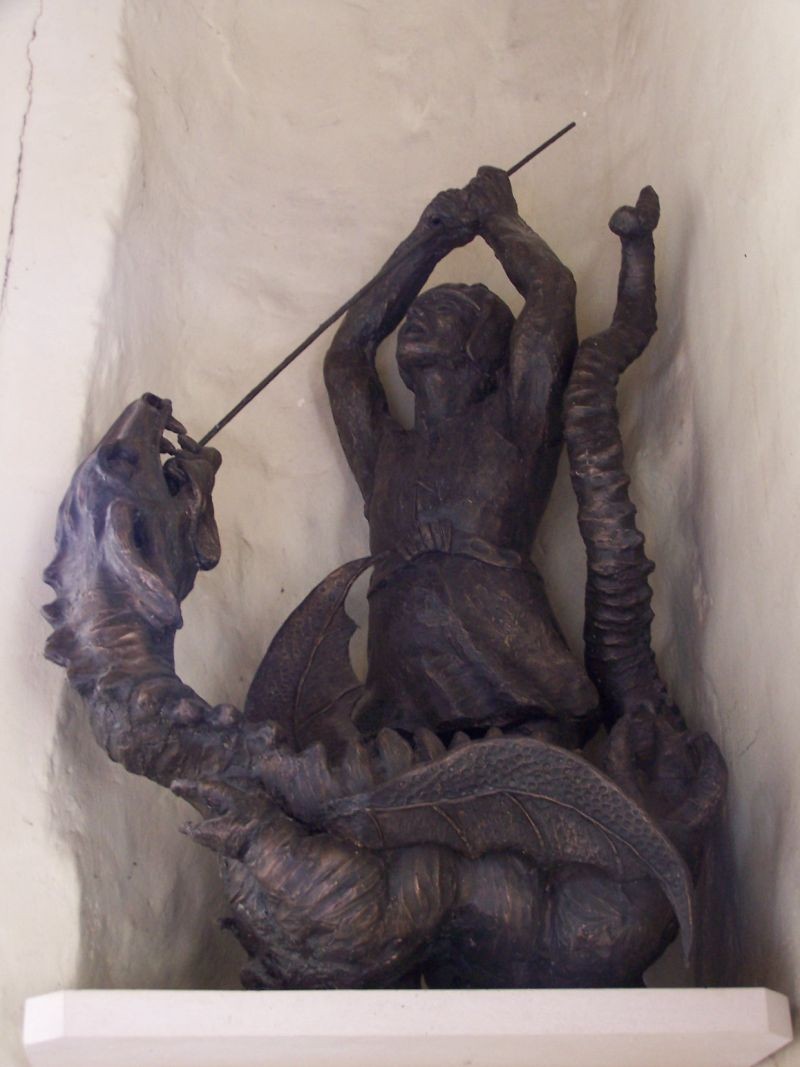 On the wall of the south aisle, try to decipher the memorial inscription to John Hubbard (1537) with the doubtful number of his wives. In the southern niche stands a modern statue depicting St George and the Dragon by Shirley Morrison in cold cast bronze. The roof of the south aisle has fine timbers and carvings, and at the exposed lower steps of the stairway which once gave access to the top of the now vanished rood screen and candlebeam which divided the nave from the chancel and supported a great cross of Christ, to honour which the eastern bays of the hammerbeam roof were painted with colours still visible after 500 years. Beneath the tower you can crane your neck to see where the hats of former bell-ringers are hung, noting that in the tower above them there is a mighty and still frequently sounded ring of bells, the oldest of which was cast in 1717. 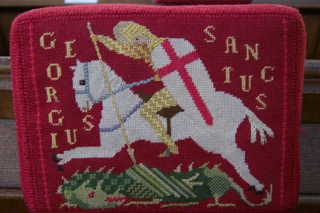 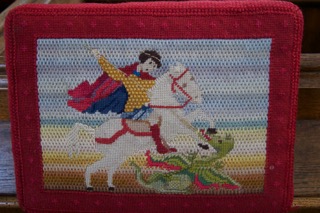 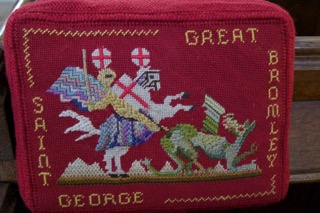 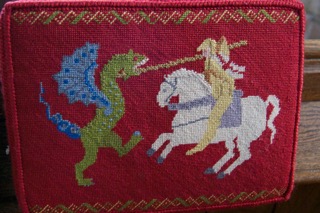 Here are four of the colourful hassocks that were made for St George's by many locals in the 1970s. They make kneeling much more comfortable to this day.

This page can offer no more than the briefest of notes for casual visitors. Copies of a more detailed guide can be purchased in the church.

For details of our 2011 and ongoing repairs programme please see the repair fund page.

How to Reach Us

The Church is situated at the junction of Badley Hall Road and Brook Street, in the centre of Great Bromley village next to the school.

The simplest way is to come along the A12, from London or Ipswich and at COLCHESTER take the A120 to HARWICH. Take the first left the A133 to CLACTON and at the first roundabout turn right towards ELMSTEAD.
At the first crossroads turn right towards GREAT BROMLEY & ARDLEIGH .
At the end of that road, go straight over between the Old Court House pub and the garage.
Continue down the hill and into the village.
You will see the Church ahead and then on your right. You can pull into the meadow there; the Rectory is the first house next to the Church.
If you come to Seven Rivers Home or exit the village centre you've gone too far! Click this Great Bromley map link to see what it looks like!

A good train service operates from London Liverpool Street Railway Station to Colchester Station or Manningtree Station. A taxi service is available from both stations.

Currently, housechurches are not meeting. Past topics include Bible Studies, the Make Poverty History Campaign, the Sacraments, Being Church.

We welcome people of all ages to our Sunday worship. The Sunday Church Club meets during the 10.30am parish Eucharist for children of school age to help them to worship and become full members of the Church.

We would like to hear from members of the Alston family presently living in New Zealand and South Africa - please contact Jenny Nicholls as in the contact details above. 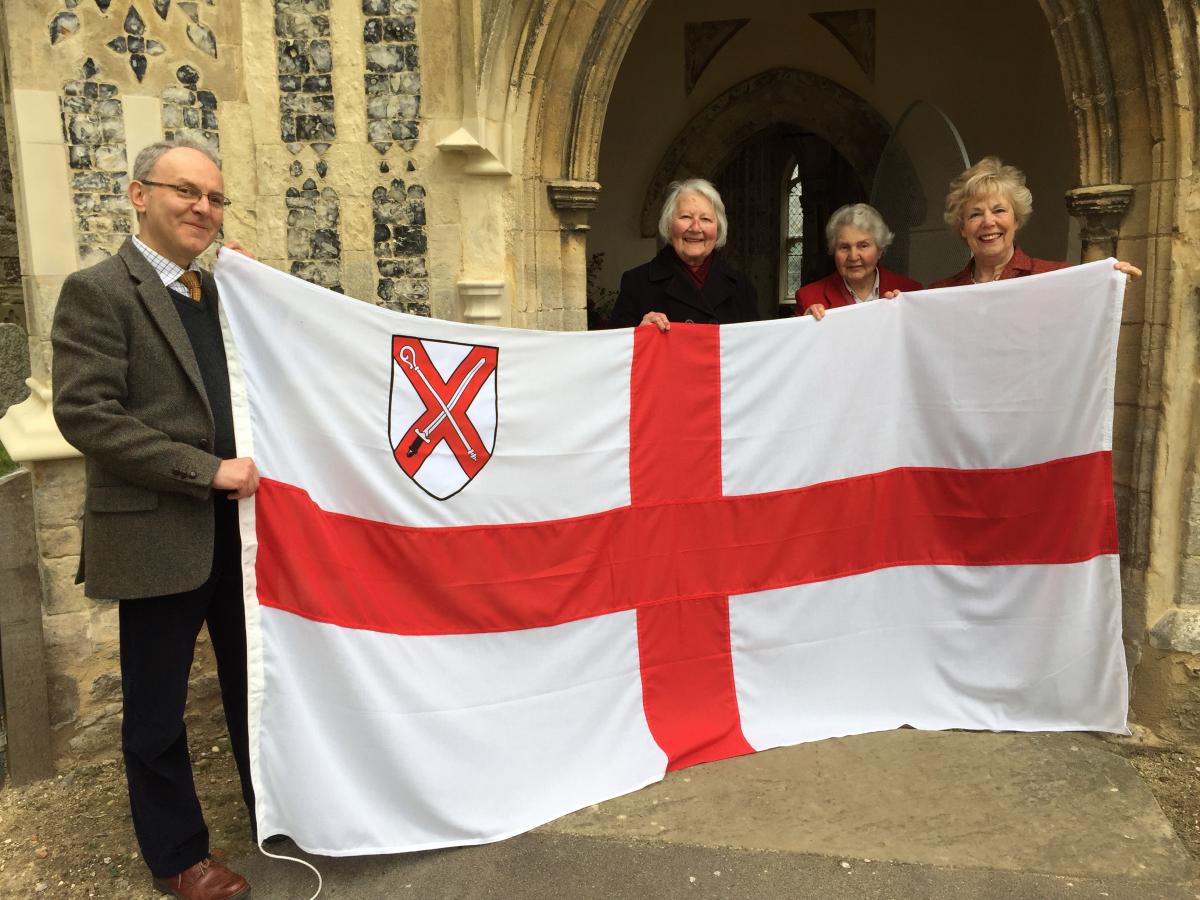