Albert Edward Bloyce was born during the latter part of 1884, in Great Bromley, the second child of George and Mary Bloyce.  George Bloyce, also from Great Bromley, was initially an agricultural labourer, though he later became a Groom, and eventually a Market Gardener.  George had married Mary Thornton, from Danbury, in 1878 and their marriage would produce 7 children, all of whom were still alive in 1911.
The Bloyce family appear to have moved around a little, possibly reflecting the nature of George's employment.  In 1891 they were living in Brightlingsea, whilst ten years later they had moved back to Great Bromley, to Hare Green.  After he had left school, Albert spent at least some time working as a labourer on a farm.
In the first week of November 1906 the British Army gained a new recruit, when Albert signed up at Colchester to join the Essex Regiment.  The exact details of Albert's pre-war Army service are not known because his Service Record no longer survives, but we do know that in April 1911 he was serving with the Regiment's 1st Battalion in Quetta, India.
The usual term of enlistment for the Infantry at that time was 7 years full time service, followed by 5 years in the Army Reserve.  This means that unless Albert decided to extend his service he would have returned to civilian life in late 1913; however, as an Army Reservist he would have been recalled to the Colours with immediate effect when war was declared.
Whether Albert did return to civilian life in 1913 is not known; it is certain that in early August 1914 - after the mobilisation of the British Army upon the outbreak of war - he was serving with the 2nd Battalion of the Essex Regiment.  By coincidence, another soldier in the Battalion was Lewis Garrod, from Little Bromley.
The Battalion was to form part of the British Expeditionary Force (B.E.F.), and embarked at Southampton on 22 August 1914, before landing at Le Havre, France early the following day.  Within two days, they were involved in heavy fighting at the Battle of Le Cateau, where the 2nd Essex formed part of the British left flank.
Over the next two months, the Battalion was involved in The Great Retreat, the battles of the Marne and the Aisne, along with the series of movements and clashes that have since been referred to as "the Race to the Sea".
"The Race to the Sea" was essentially a series of attempts by both sides to turn the open (western) flank of the enemy: it ended in several battles during late October and early November 1914 (the best known being the First Battle of Ypres), and after which both sides faced each other in a relatively static, continuous line stretching from the North Sea to the Swiss border. This marked the start of trench warfare, which was to last until the Spring of 1918.
On 21 October 1914, the 2nd Essex were involved in heavy fighting,  which successfully managed to halt part of the German advance around the crossroads village of Le Gheer, just inside the Belgian border south of Ypres.  The Battalion suffered 69 casualties, including Albert Bloyce, and Lewis Garrod, who were both killed in action.
Albert has no known grave, and is now commemorated on Panel 7 of the Ploegsteert Memorial to the Missing, in Belgium.  The Memorial commemorates more than 11,000 servicemen of the United Kingdom and South African forces who died in this sector during the Great War, and have no known grave. 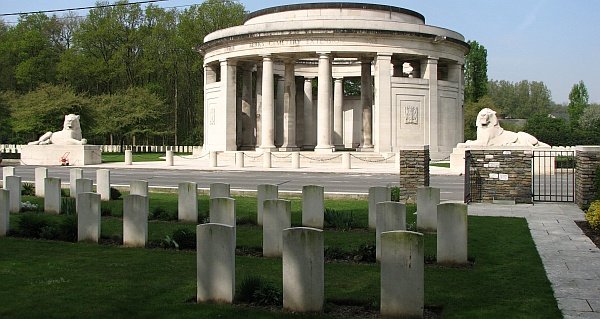 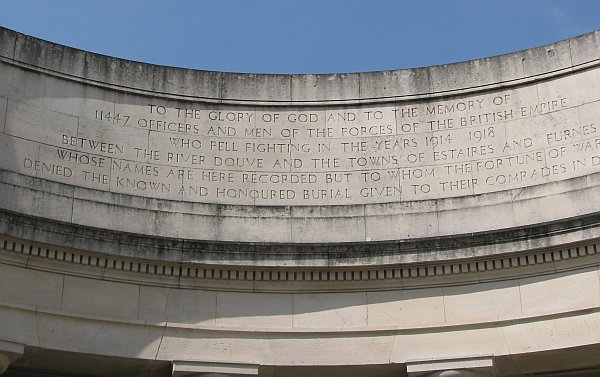 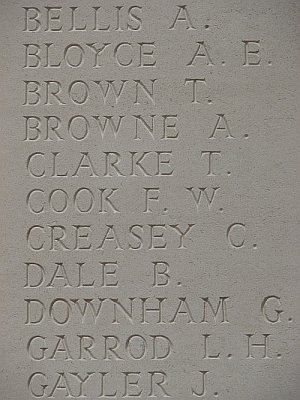