Jabez Spraggons and his twin brother Robert were born in Great Bromley – probably at the family home on Back Road, Hare Green - in the summer of 1891.  The twins were the youngest of Alfred and Eliza Spraggons’ six children, though the only other boy had died as a baby.

Alfred Spraggons (originally from Waldringfield, near Sudbury) was an agricultural labourer, and had married Eliza Taylor from Elmstead Market in 1879.  For the first years of their marriage they lived in Elmstead, which was where Jabez’s three sisters were born, before moving to Great Bromley sometime after 1886.

After leaving school, Jabez was employed as a Farm Labourer and remained living at Hare Green after his father’s death in 1909, along with his mother, brother and eldest sister.

In early 1912, Jabez joined the Essex Regiment.  He may well have been posted overseas for garrison duty in India, and later Mauritius, before being recalled to the UK in late 1914.

Jabez and his Battalion, the 1st Essex, were among the first Allied troops to land on the Gallipoli peninsular in April 1915.  Jabez was wounded in the first weeks of the campaign, but re-joined the 1st Essex, almost certainly before they left Gallipoli in January 1916 as part of the Allied withdrawal. The 1st Essex were sent to France in late March of 1916, and in the next year and a half took part in the Battle of the Somme, the Battle of Arras and the Third Battle of Ypres.

We do not know when Jabez was wounded for a second time, but it seems likely to have occurred on 10th August 1917 near the village of Pilckem, just north of Ypres.  The Battalion were subjected to heavy shelling whilst on trench duty in the support line, though the War Diary records that they suffered very few casualties.

Jabez was evacuated to a Casualty Clearing Station (CCS) just north of the town of Poperinge in Belgium, and approximately 18 miles behind the front line.  This was the second of three CCS that had been humorously nicknamed by the British soldiers as Mendinghem, Dozinghem and Bandaghem.

Jabez died of his wounds on 16th August 1917, and was buried in the adjacent Dozinghem Military Cemetery.  It is the last resting place of over 3,000 Commonwealth war dead, most of them from the Great War.

Note: Jabez Henry Spraggons is the name under which Jabez’s birth was registered, and the name he used when joining the Army in 1912.  This contrasts with the names GH Spraggins, and George Spraggins, under which he is commemorated on Great Bromley’s War Memorials. Does anyone know why? His sisters were all registered at birth as Spraggins! We would be very grateful to make contact with any Spraggons (or Spraggins) relatives. 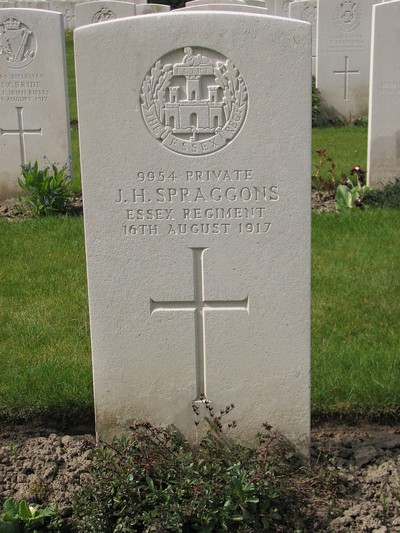