John Hilton Austin was born in Great Bromley in late 1898, most likely at his parents’ house in Balls Green. Both of John’s parents were Great Bromley born and bred.  His father, John Ernest Austin was an Agricultural Labourer, and later a Horseman on a farm.  He had married Matilda Gosling in 1893, and together they would have 7 children, of whom 2 died in infancy.

Unfortunately, there appear to be no surviving records detailing what John did after he left school by way of employment.  Given his father’s background, it is distinctly possible that he was employed on a local farm.

When conscription was introduced in 1916, it specifically allowed for men born in 1898 to volunteer for the Army, provided that they did so before they attained their 18th birthday.  Whether John did this is not known. In the event that he was conscripted, John would have been called to enrol shortly after his 18th birthday.  He may then stayed with a training unit, or alternatively he was then passed into the Army Reserve, to return home until such time as he was called up.

We do not know for sure when John was called up, nor when he was sent to France.  There is some evidence to suggest that he may have been called up at the end of May 1918, and sent to France on 19th September, however this is far from certain.

We do know that the only unit that John served with overseas was the 12th Battalion of the East Surrey Regiment, and that he was with them near Ypres in Belgium, at the end of September 1918. The British offensives that finally broke the German Army started in France in August 1918, but it was not until 28th September that an offensive was launched in Belgium.

On the 29th September the 12th East Surreys moved up to a concentration area just behind the new front line near the village of Kortewilde.  In the course of this advance they met an enemy strongpoint that had not been neutralised the previous day, and suffered 4 men killed and 11 men wounded.

John was one of those casualties, and died of his wounds that same day, aged 21.   He has no known grave, and is officially commemorated on Panel 79 of the Tyne Cot Memorial to the Missing, located in the Tyne Cot Cemetery, near Passchendaele, Belgium. 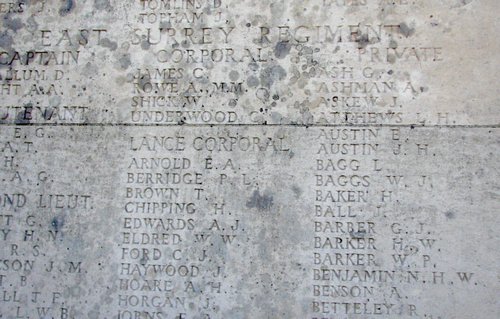 Austin is still a local name in the village. John's Grandparents were James and Lydia Austin, who were great-grandparents to Tubby Austin & Nancy Kempster and their siblings. I believe Arthur Albert Austin was his first cousin.