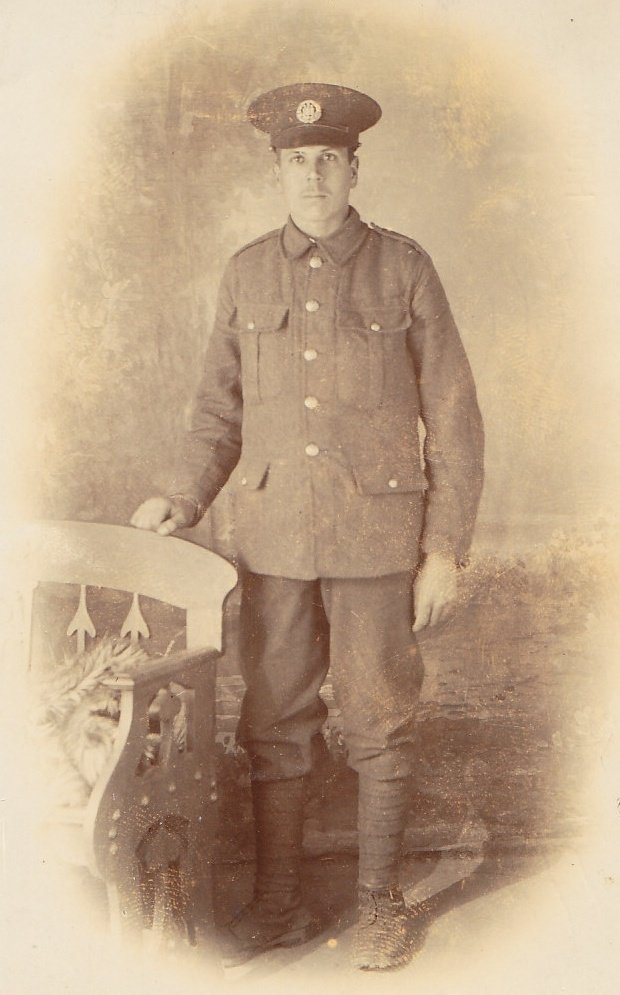 Walter Thornton was born at Chapel Lane, in Ball's Green, Great Bromley on 29th July 1890, the fourth child of John and Sarah Thornton.  John, who originally hailed from Danbury, was a Farm Labourer and in 1882 had married Sarah Sparrow, a Great Bromley born and bred. Like all of his brothers and sisters, Walter attended the village school in Brook Street. After leaving school he worked as a farm labourer, as did a large number of the village’s male inhabitants.

On 29th August 1914, less than a month after Britain had declared war on Germany for invading neutral Belgium, Walter went to Colchester to volunteer to join the British Army.  Before conscription was introduced in 1916, recruits were able to choose which branch of the armed forces, and indeed which Regiment, they wished to join:  Walter elected to join the Northamptonshire Regiment, for reasons unknown.

We know from Walter’s surviving Service Record that at the time he joined up he was 5 foot, 6 ¾ inches tall, and weighed 8 stone, 8 pounds. In common with all military recruits, Walter would have had undergone several weeks of Basic Training in an attempt to provide him with the elementary soldiering skills.

On 10th February 1915, Walter disembarked in France – almost certainly at the port of Le Havre - as part of a draft of replacements posted to join the Regiment’s 1st Battalion.

The 1st Northamptons were a regular Army Battalion that had been serving in France and Flanders since August of the previous year.  At the time that Walter and his fellow replacements joined the Battalion, located just behind the lines, in billets at Allouagne (near the town of Bethune in the Pas de Calais). At this point of the war the usual routine was for a Battalion to spend several days "in the trenches", and then several days behind the lines in Billets.

Walter’s first experience of the front line was almost certainly on 14th March, when the Battalion moved into the trenches at Festubert, near Bethune, where they remained until relieved four days later.  The Battalion’s War Diary describes each day as being “Quiet”.

Even whilst in billets, the Battalion was often not more than a few miles from the front, and spent much of this time in training, though the men were sometimes sent up to the trenches where they were employed on working parties.

What has become known to history as the Battle of Aubers Ridge, took place on 9th May 1915: It was essentially a two pronged attack using British and Indian units, which was intended to wrest control from the Germans of the low lying ridge which overlooked British lines, as well as to break one of their key supply routes.

The 1st Northamptons were at the extreme right of the stronger, Southern attack, near the village of Richebourg L’Avoue.  Originally planned to commence on 8th May 1915, the offensive was postponed by one day – the attacks due to commence just after dawn.

The Battalion’s War Diary says of the attack:

“At 5.40 a.m. precisely the Bombardment ceased & the Battalion with the Royal Sussex rushed to the assault.  Our first companies got close up to the German barbed wire & Capt. Dickson & about 20 men reached a gap made by the guns in the trenches.  Here these men [were] all shot down.  Capt. Dickson being killed at once & also Capt. Farrar. The enemy had opened a heavy rifle and machine gun fire from their trenches before our men could get near them, and we were mowed down”.

The attacks were a disaster for the British, largely because their artillery bombardment was insufficient for its intended purpose, and left the German defences intact: No ground was taken, whilst German artillery, rifle and machine gun fire inflicted heavy losses on the attackers.  The British suffered more than 11,000 casualties on that one day, most of them before the attacking troops even got close to the German lines.

The 1st Northamptons suffered the highest casualties amongst the attacking units in the Southern attack, losing approximately 550 officers and men – 70% of those involved - a large proportion of whom were killed.

One of those reported Missing after the attack was Walter Thornton, though his family do not appear to have been officially notified of this until the early part of June.  In such cases, there would then follow a delay, whilst the Army continued investigations to try to determine the man’s fate, including the possibility that he had been captured by the enemy.

The Thornton family had to wait until the end of September, before they were notified that Walter had in fact been Killed in Action on 9th May 1915.  He was twenty four years old.

Almost none of the officers and men of the 1st Northamptons who were killed during the Battle of Aubers Ridge have a known grave, and they are officially commemorated by having their names inscribed on the Le Touret Memorial, near Bethune, which commemorates over 13,000 soldiers who fell in the area before 25th September 1915. Walter’s name can be found on Panel 29 of the Memorial.