William Bantick was born in Great Bromley in late 1898 or early 1899, the eldest of 5 children of Henry and Florence Bantick (nee Keeble).

William’s birth was registered in the name of Henry William Bantick, but from an early age he seems to have been called William, probably to avoid confusion with his father.

Unfortunately, there appear to be no surviving records detailing what William did by way of employment, after he left school. If William was born in 1898, there is a possibility that he may have volunteered to join the British Army.  If he did not, then he would have been conscripted shortly after his 18th birthday.

We do not know exactly when William was sent to join the British Expeditionary Force (B.E.F.) in France and Belgium, but it would not have been earlier than his 19th birthday.  Following his arrival in France, William was posted to the 2nd Battalion of the Essex Regiment.

The Battalion had suffered very heavy casualties at the end of March 1918, in the fighting near Arras during the first of the German spring offensives.  In mid- April, they were sent north where they helped stop the second of the German offensives.  The Battalion then remained in this area - between the towns of Bethune and Merville - over the coming months.

In August 1918, the B.E.F. started a series of offensives which would eventually lead to the Germans signing the Armistice.  The 2nd Essex were moved to positions east of Arras in late August, ready to take part in the offensive to be launched in that area.

It is almost certain that it was during the next few days that William was wounded, possibly on 2nd September when the Battalion were involved in a successful attack against German trenches near the village of Eterpigny.

William was evacuated from the front to a Casualty Clearing Station near the village of Ligny-St. Flochel.  There, he died of wounds on 3rd September 1918, aged just 19.  He was laid to rest nearby in what is now called the Ligny-St. Flochel British Cemetery.

Willie was eldest brother to Roly (Edwin Roland) and Basil who lived with their mother Florence at 3 Boulton Cottages, Frating Rd Balls Green. Basil worked for Percy Crossman, Roly on the land. 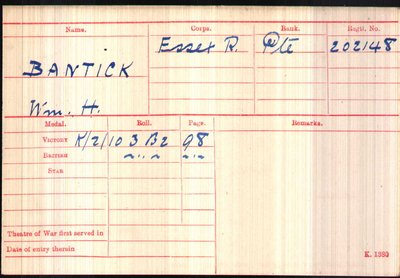